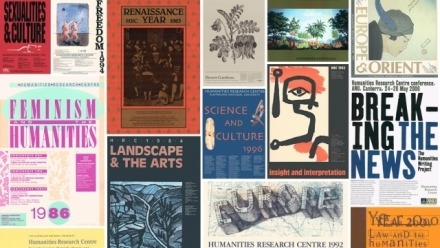 The poster collection of the Humanities Research Centre can now be viewed online!

The Humanities Research Centre (HRC) at the Australian National University (ANU) was established in 1972 and became fully operational by 1975. Its foundation was ground-breaking. There was no other centre in Australia like it. The HRC’s mission was to stimulate and advance research in the humanities not only across ANU, but also nationally and internationally. It aimed to foster inventive and interdisciplinary academic inquiry by bringing together scholars who traditionally remained confined to their own fields. It also promoted collaborations between academic and cultural institutions at local, national, and global levels.

Since 1977, the Centre has adopted an annual theme to provide a useful, but not restrictive, focus for the year’s research interests. Between 1978 and 2013 annual posters were produced which encapsulated the yearly theme and detailed the HRC’s conferences and events for the year.

The Centre’s guiding purview in earlier years, as HRC documents throughout the 1970s and 1980s record, was fostering research regarding: “European Thought and Culture and their Influence Overseas.” From this starting point, the scope of the HRC’s academic reach developed and grew, and the annual theme posters provide a fascinating timeline of this evolution.

The HRC Poster Collection holds 36 framed annual theme posters from 1978 – 2013. The Collection also includes 10 posters which were either connected to themed events, or detail additional HRC activities, principally the hosting of the Seymour Lecture Series in Biography from 2005 – 2009.

The HRC Poster Collection cannot convey the enormous breadth of HRC achievement – the crucial component of hosting Visiting Fellows at the Centre, for example, is not featured, except on three posters. The posters in the Collection do, however, abundantly display the remarkably diverse research interests of the HRC, its significant stimulation of interdisciplinary inquiry, and an enormous variety of enriching collaborations with national and international academic and cultural institutions. The posters presented here provide a fascinating record of the growth of the HRC and demonstrate the drive for promoting innovative humanities scholarship that continues today.

You can see all the posters and read more about their significance here.