The Humanities Research Centre (HRC) at the Australian National University (ANU) was established in 1972 and became fully operational by 1975. Its foundation was ground-breaking. There was no other centre in Australia like it. The HRC’s mission was to stimulate and advance research in the humanities not only across ANU, but also nationally and internationally. It aimed to foster inventive and interdisciplinary academic inquiry by bringing together scholars who traditionally remained confined to their own fields. It also promoted collaborations between academic and cultural institutions at local, national, and global levels.

Since 1977, the Centre has adopted an annual theme to provide a useful, but not restrictive, focus for the year’s research interests. Between 1978 and 2013 annual posters were produced which encapsulated the yearly theme and detailed the HRC’s conferences and events for the year.

The Centre’s guiding purview in earlier years, as HRC documents throughout the 1970s and 1980s record, was fostering research regarding: “European Thought and Culture and their Influence Overseas.” From this starting point, the scope of the HRC’s academic reach developed and grew, and the annual theme posters provide a fascinating timeline of this evolution.

The HRC Poster Collection holds 36 framed annual theme posters from 1978 – 2013. The Collection also includes 10 posters which were either connected to themed events, or detail additional HRC activities, principally the hosting of the Seymour Lecture Series in Biography from 2005 – 2009.

The HRC Poster Collection cannot convey the enormous breadth of HRC achievement – the crucial component of hosting Visiting Fellows at the Centre, for example, is not featured, except on three posters. The posters in the Collection do, however, abundantly display the remarkably diverse research interests of the HRC, its significant stimulation of interdisciplinary inquiry, and an enormous variety of enriching collaborations with national and international academic and cultural institutions. The posters presented here provide a fascinating record of the growth of the HRC and demonstrate the drive for promoting innovative humanities scholarship that continues today.

“Cities, Imaginaries, Publics,” 2013 HRC annual theme poster. The centenary of Canberra inspired the year’s theme and the image used. The focus on exploring meanings given to public spaces became localised in the conference “Shaping Canberra: The Lived Experience of Place, Home and Capital.” This is the last poster in the HRC Poster Collection. Conferences and events became increasingly, then only, advertised online. The tradition of annual themes remains, and for 2023, it is “Repair”. The 2013 poster is signed on the back by the designer, then HRC Programs Manager Leena Messina.

“Ecological Enlightenment,” 2012 HRC annual theme poster. The year, with a theme encompassing research across the humanities regarding climate change, delivered an important event. The “Anthropocene Humanities” conference, canvassing an emerging field, was part of the Annual Meeting of the global Consortium of Humanities Centers and Institutes. The Consortium had not met in Australia since 1999 during “Religion, Society and Values” year. A major collaborative exhibition, “Antarctica”, was held at ANU’s Drill Hall Gallery in association with the Meeting.

“Cosmopolitanisms,” 2009 HRC annual theme poster. A diverse range of conferences and other events included a summer school and the Seymour Lecture. Someone had the unenviable task of stickering on each poster a date change for the “Reworking the Regency” conference held at the University of Melbourne. The image is named “View from a multi-storey carpark,” courtesy of Katie Hayne and Ursula Frederick. 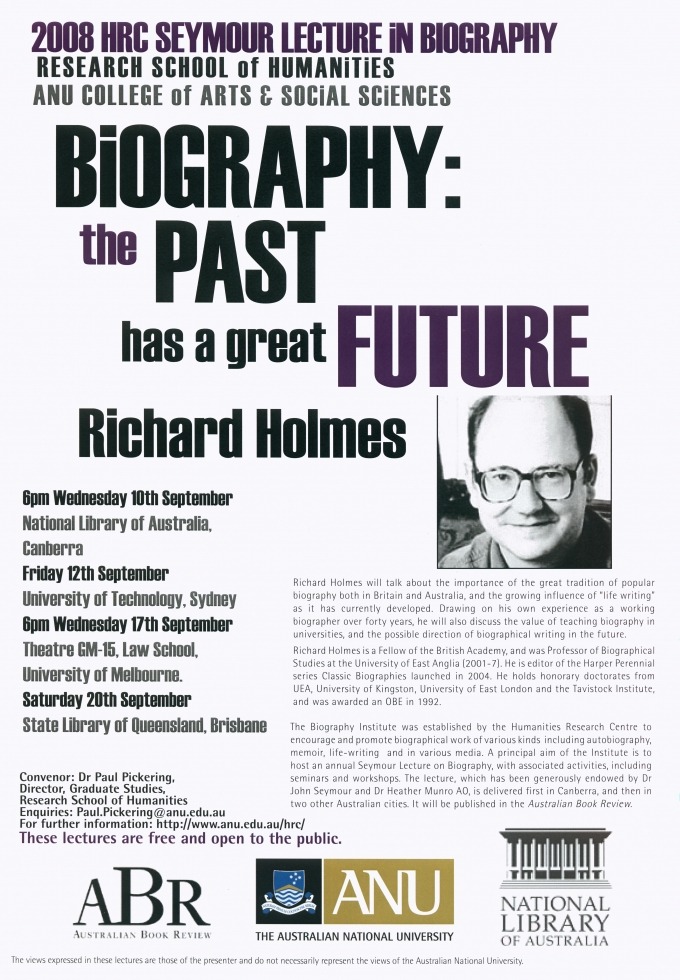 “Biography: The Past has a Great Future,” 2008 HRC Seymour Lecture in Biography, delivered by Richard Holmes. Besides the delivery of this lecture at the National Library of Australia, an unprecedented three interstate venues are listed for the later presentation of the lecture. These are the University of Technology in Sydney, the Law School at the University of Melbourne, and the State Library of Queensland in Brisbane.

“Re enactment,” 2008 HRC annual theme poster. A summer school and an exhibition at ANU’s Drill Hall Gallery are featured, both significant staples in HRC activities. A conference in honour of renowned historian Henry Reynolds, “Race, Nation, History,” is also noted. The image is: “Performance by Dadang Christanto, Tukgunung Tan Aren and Kilau Setanggi Timur, HRC ANU 2004.” The photo is attributed to Leena Messina, HRC. Messina, then Programs Manager for the HRC, also designed the layout of the poster and signed the back of it. 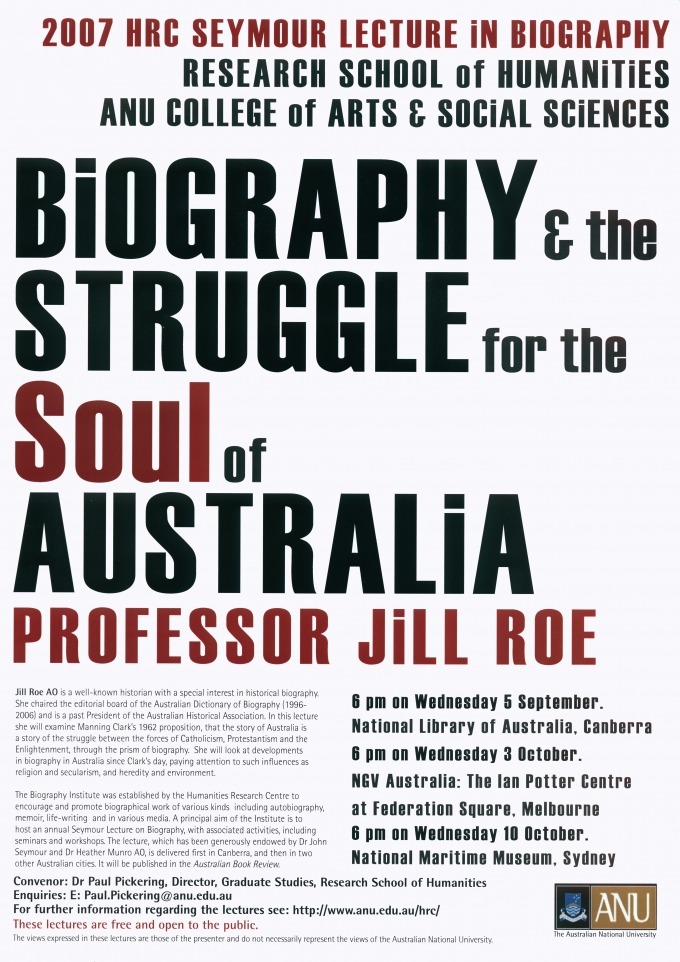 “Biography and the Struggle for the Soul of Australia,” 2007 HRC Seymour Lecture in Biography, delivered by Professor Jill Roe. Following tradition, this lecture was presented at the National Library of Australia first, and then at two interstate locations, in this case the NGV Australia in Melbourne and the National Maritime Museum in Sydney. The Biography Institute of the HRC, which organised the Seymour Lectures and is listed on other relevant posters, is described in some detail here.

2007 HRC annual poster listing conferences and events. Since the adoption of HRC annual themes in 1977, this is the second year without one; the first was in 1988. This was because the Centre had signalled in 2005 that from 2007, focus on a central theme would be diversified into three broad “Research Platforms”. Posters after 2007, while still displaying an overall title for the year, reflect this greater variety. The artwork is “A View of Philip James de Loutherbourg’s Eidophusikon” by Edward Francis Burney, 1782, held by the British Museum. 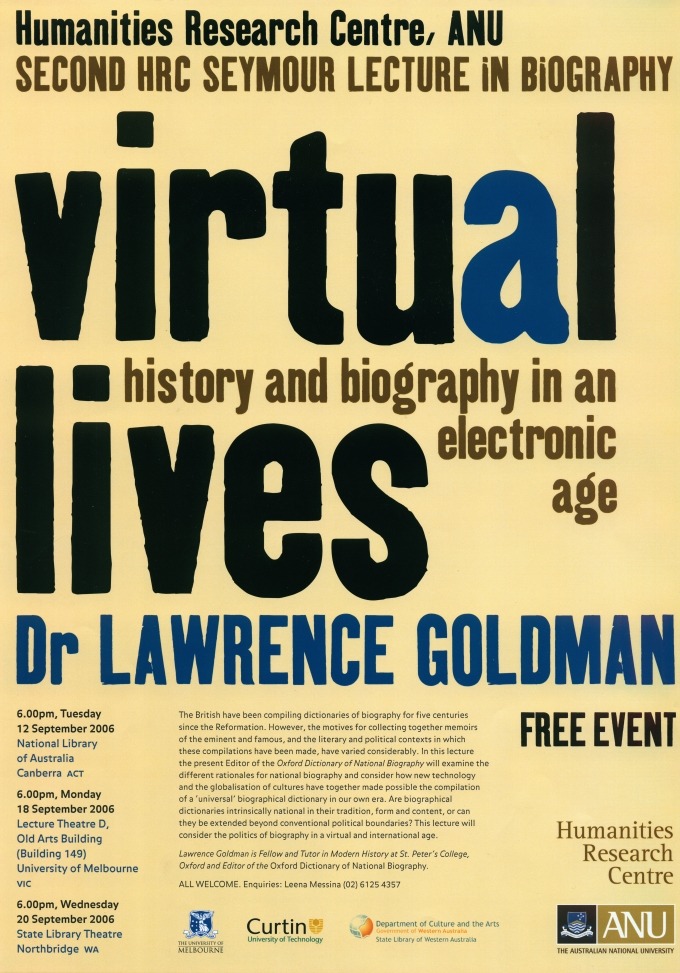 “Virtual Lives – History and Biography in an Electronic Age,” 2006 Second HRC Seymour Lecture in Biography, delivered by Dr Lawrence Goldman. In keeping with the first Seymour Lecture in 2005, this event occurred in Canberra first, and then in two other Australian cities. The lecture was delivered at the National Library of Australia, the University of Melbourne, and the State Library Theatre in Western Australia. 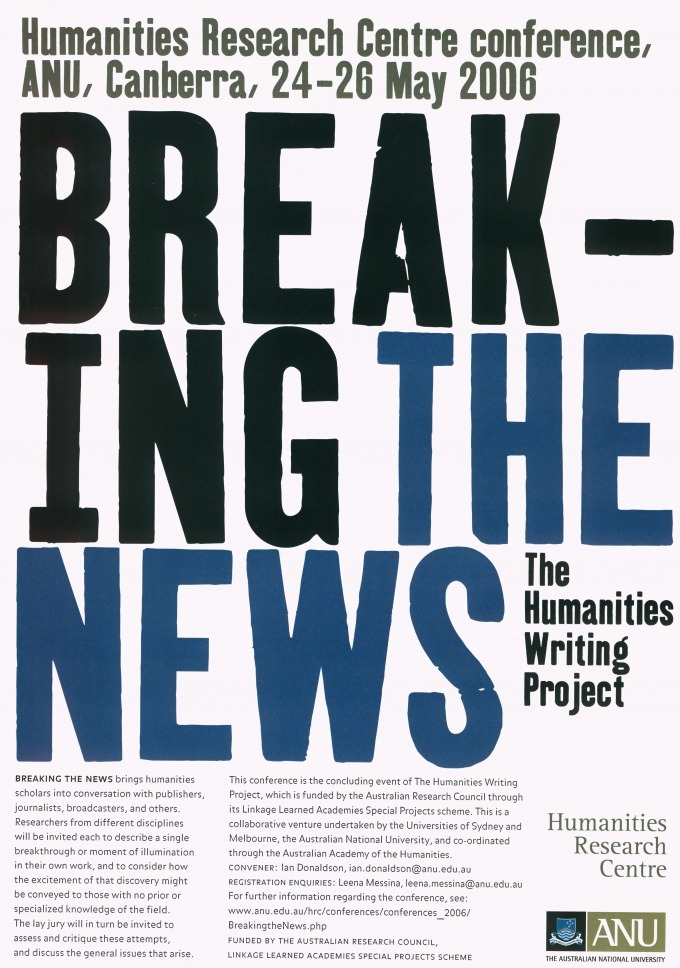 “Breaking the News,” 2006 HRC conference. This was the concluding event in the Humanities Writing Project, a collaborative initiative undertaken with the Universities of Melbourne and Sydney, and funded by the Australian Research Council. For the event, scholars across disciplines were invited to relate a research breakthrough moment in a manner that a non-specialist might appreciate, and then have their attempts critiqued by a lay jury. 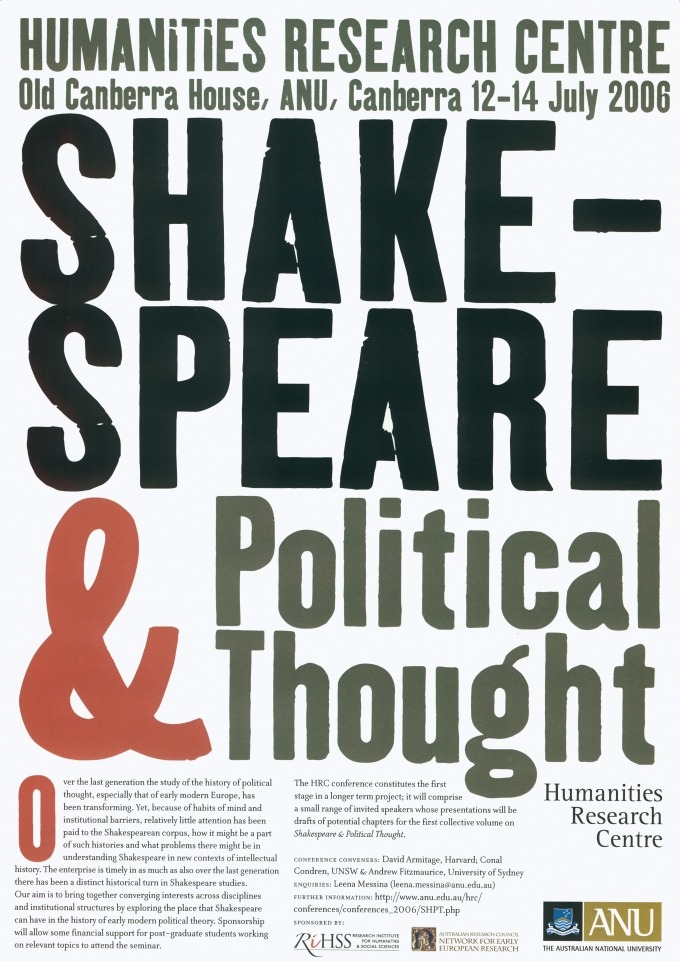 “Shakespeare and Political Thought,” 2006 HRC conference. The description of this event is an effective summary of a driving intent behind the HRC overall: “Our aim is to bring together converging interests across disciplines and institutional structures.” The conference was sponsored by the Research Institute for Humanities and Social Sciences and the Network for Early European Research.

“Remembering Lives: Biography, Memory and Commemoration,” 2006 HRC annual theme poster. The poster promotes a remarkable number of HRC collaborations with different institutions across the ANU, including the National Institute of Social Sciences and Law, the Australian Dictionary of Biography, the Cultures of Human Rights Network, and the HRC initiated Centre for Cross-Cultural Research. The artwork is Characters and Caricaturas by William Hogarth, 1743.