» Events » Books that Changed Humanity: Is Shakespeare a Book?

Books that Changed Humanity: Is Shakespeare a Book? 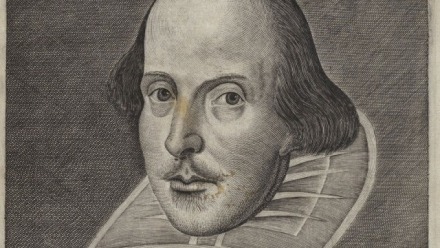 Books that Changed Humanity is an initiative of the Humanities Research Centre, based at the Australian National University. The HRC invites experts to introduce and lead discussion of major texts from a variety of cultural traditions, all of which have informed the way we understand ourselves both individually and collectively as human beings.

Join us as Dr Kate Flaherty (Australian National University) explores William Shakespeare's relationship with text throughout history in Is Shakespeare a Book?

In early April of 2016 a multitude of international news outlets reported the ‘discovery’ of a copy of Shakespeare’s First Folio in a stately home on the Scottish Isle of Bute. The scale of excitement reflects Shakespeare’s ongoing influence on the human imagination. The press also registered wonder that we can hold in our hands an object closely connected with the poet and playwright of 400 years ago. But how is the First Folio connected with Shakespeare? It is certain he never held a copy in his hands; it was published by his colleagues seven years after he died. Yet there are many plays - Macbeth and Julius Caesar among them - which we would not have today were it not for this famous book. This paper tells a story of how Shakespeare’s relationship with text has been understood through history, and reveals the benefits and limitations of understanding Shakespeare as a book.

All members of the public are welcome to come, listen, and share their thoughts over a friendly glass of wine.

Kate Flaherty is Lecturer in English and Drama at the Australian National University. She researches how Shakespeare’s works play on the stage of public culture. Her monograph Ours as we play it: Australia plays Shakespeare (UWAP, 2011) examines three plays in performance in contemporary Australia. Her more recent work investigates the interplay of Shakespearean drama with education, imperial cultural politics, and female creative agency in colonial Australia. She has been published in a variety of journals including Contemporary Theatre Review, New Theatre Quarterly, Australian Studies and Shakespeare Survey. Kate loves to share her research and speaks frequently at public events and school workshops.