The HRC Advisory Board comprises preeminent members of the academy and the community with a commitment to the role of the humanities in the university and the public sphere.

Dr Tony Golsby-Smith is the Founder of 2nd Road Pty Limited and serves as its Chief Executive Officer and Director. Dr Golsby-Smith has over 20 years of consulting and training experience. He has broad experience in transforming corporate cultures to become more creative and more open in their thinking and communication. He works primarily at the senior level, engaging executive teams in Strategic Conversations™ and training them in strategic thinking and leadership skills.

Delivering corporate culture change requires more than a one man band, so Tony always works with other Second Road consultants. He focuses on leadership teams because they are at the heart of successful change, while other Second Road consultants embed the tools and methods more deeply within an organization. His particular area of expertise is designing better information-based products and services. He knows how innovation works and can help clients set up environments that breed ideas and design them into better products, services, and processes. He is a master of the innovation process and was awarded the prestigious Visiting Chair of Design at Carnegie Mellon University in 1995.

Dr Golsby-Smith has an Honours degree in English Literature from the University of Sydney, as well as postgraduate qualifications from the US. He holds a Doctorate for ‘Pursuing the Art of Strategic Conversations’, which crystallises the deep theory of thinking and communicating that undergirds all his work, and believes that the critical and creative thinking nurtured by the Humanities is vital to social and economic innovation. 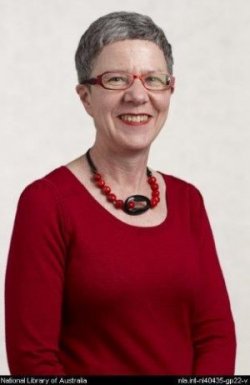 Dr Marie-Louise Ayres has worked in research libraries for more than 20 years, and in senior management roles at the National Library of Australia since 2002.

Her career has spanned development and management of very large archival collections, and development of innovative digital services which provide access to Australia’s rich documentary heritage, including AustLit and Music Australia. More recently, Dr Ayres has worked to increase the prominence of the National Library’s collection – and the collections of hundreds of other cultural institutions – by leading Trove, the Library’s flagship digital service.

She has been a leader and participant in numerous National and State Libraries Australasia projects and working groups, and was a founding member of the GLAMpeak coalition. She is actively involved in discussions around national research infrastructure, the role of libraries in that infrastructure and opportunities to leverage investments across public and research infrastructure. She is a frequent presenter at national and international conferences, and has published extensively.

Nick Cater commenced as Executive Director of the Menzies Research Centre on 14 July 2014.

Cater is a journalist and author and has been visiting Fellow at the Centre for Independent Studies. He is a former editor of The Weekend Australian and deputy editor of The Sunday Telegraph. He was born and educated in the United Kingdom and began his career at the BBC before moving to Australia in 1989 to join News Corp.

He edited The Howard Factor (Melbourne University, 2006) and wrote the best-seller The Lucky Culture (HarperCollins, 2013) described by Prime Minister Tony Abbott as a “beautifully written and perceptive book [that] is a historical essay on Australia’s public culture . . . it’s a personal reflection by a refugee from Thatcherism, now born-again conservative, observed and analysed with a newspaperman’s thoroughness”.

Nick is a columnist with The Australian and a regular commentator on political and cultural affairs on radio and television.

A graduate of the universities of Sydney and Oxford, Will Christie is a former Director of the Humanities Research Centre at the ANU. He was the founding President of the Romantic Studies Association of Australasia and in 2011 was elected Fellow of the Australian Academy of the Humanities. His scholarly work in Romantic studies has been widely published and his Samuel Taylor Coleridge: A Literary Life (2006) awarded the NSW Premier’s Biennial Prize for Literary Scholarship in 2008. Editor of The Letters of Francis Jeffrey to Thomas and Jane Welsh Carlyle (2008), his other publications include The Edinburgh Review in the Literary Culture of Romantic Britain: Mammoth and Megalonyx (2009), Dylan Thomas: A Literary Life (2014) and The Two Romanticisms, and Other Essays (2015).

With the aid of Discovery grants from the Australian Research Council, he is currently researching a critical biography of the Scottish critic, politician, and judge, Francis Jeffrey, editor of the early nineteenth-century Edinburgh Review, and a major study of public lecturing in the Romantic period.

For many years president of the Dylan Thomas Society of Australia and an active member of a number of literary societies, Will is also the author of Under Mulga Wood (2004), an award-winning play for voices that has enjoyed performances around Australia and been broadcast and recorded by the ABC.

Professor John Fitzgerald is the Truby and Florence Williams Chair of Social Investment and Philanthropy at Swinburne University of Technology. Prior to this he headed the Ford Foundation in Beijing and before that he was the Associate Dean (International) & Professor of Asian Studies at La Trobe University. He taught undergraduate subjects in East Asian politics and history, and supervised graduate students in all fields of modern Chinese history. From 1985 he shared a joint appointment with his wife, Antonia Finnane, in history at Melbourne University, until 1992 wen he joined the Department of Politics at La Trobe University. He has held honorary positions in the Asian Studies Association of Australia, the Chinese Studies Association of Australia, the Melbourne China Study Group, and the Asia Education Foundation, and has worked in an advisory capacity with National Library of Australia and the Australian Research Council.

Raelene Frances is Dean of the College of Arts and Social Sciences and Professor of History at the Australian National University.

She has published on the history of work, women’s history, Aboriginal/European contact history, religious and community history and has also co-edited several collections of essays on Australian and New Zealand history.

Her books include The Politics of Work, which won the Australian Historical Association’s Hancock Prize, Women and the Great War (co-authored with Bruce Scates), which won the New South Wales Premier’s History Prize and Selling Sex: A Hidden History of Prostitution, which was short-listed for the Ernest Scott History Prize. She is a Fellow of the Academy of Social Sciences in Australia.

Professor Jacqueline Lo is Associate Dean (International) for the ANU College of Arts and Social Sciences and Director of the Australian National University’s Centre for European Studies. She is also an Adjunct Research Fellow of the Centre for Interweaving Performance Cultures at the Free University of Berlin. Her research focuses on issues of race, colonialism, diaspora and the interaction of cultures and communities across ethnic, national and regional borders. Publications include Staging Nation (HKUP 2002), Performance and Cosmopolitics (Palgrave Macmillan 2007, with Helen Gilbert). Her latest publications include editing a special issue of Crossings: Journal of Migration and Culture focusing on transnational memories in Germany and Australia (2013) and a special issue of the Asia Europe Journal (2014).

Jacqueline has considerable experience in the areas of education and cultural policy, cultural diplomacy and management in the tertiary sector. She is presently serving on the reference group for the ACT Arts Framework Policy Review and regularly conducts briefings for govenrment and the diplomatic corps. She has been Visiting Fellow at UCLA, NYU, the Free University of Berlin and Konstanz University, and DAAD Guest Professor at the University of Cologne. She is the Founding Chair of the Asian Australian Studies Research Network and a member of the NYU Global Arts Exchange Program. She was awarded the Chevalier Ordre des Palmes Académiques in 2014.

Professor Iain McCalman, Director of the Environment Institute, The University of Sydney

Professor Iain McCalman was born in Nyasaland in 1947, schooled in Zimbabwe and did his higher education in Australia. His last book, Darwin’s Armada (Penguin, 2009) won three prizes and was the basis of the TV series, Darwin’s Brave New World. He is a Fellow of three Learned Academies and is a former President of the Australian Academy of the Humanities. He was Director of the Humanities Research Centre from 1995-2002 and won the inaugural Vice-Chancellor’s Prize at ANU for Teaching Excellence. He is a former Federation Fellow and currently a Research Professor in history at the University of Sydney and co-Director of the Sydney Environment Institute. His new book, The Reef – A Passionate History, from Captain Cook to Climate Change, was published by Farrar, Strauss and Giroux in the USA in May 2014 and by Penguin in Australia in November. He was made Officer of the Order of Australia in 2007 for services to history and the humanities

Born and raised in Melbourne, Angus held the position of Director of the National Portrait Gallery of Australia from February 2014 to April 2019.

He studied Fine Arts and History at the University of Melbourne, graduating in 1986. In summer of 1987, he was an intern at the Peggy Guggenheim Collection in Venice. He studied for a year at the Bibliotheca Hertziana in Rome, graduating MA (University of Melbourne) in 1993. From 1987 to 1991 he served as aide to Dr J. Davis McCaughey, AC, Governor of Victoria. In 1994 Angus won a Fulbright Scholarship for further study at the Institute of Fine Arts at New York University.

In January 1996 Angus was appointed Associate Curator of European Art at the Art Gallery of South Australia in Adelaide, and was promoted Curator in 1998. He curated and wrote the catalogue of a number of exhibitions, including Bohemian London: Camden Town and Bloomsbury Paintings in Adelaide and Love & Death: Art in the Age of Queen Victoria, which toured to Sydney, Brisbane, and Auckland, New Zealand, in 2002.

Angus was appointed Curator of Paintings and Sculpture at the Yale Center for British Art in May 2003, and served in that capacity until January 2014 (and from 2008 as Senior Curator). He is the author of A Brief History of the Smile (2003), and The Finger: A Handbook (2010). His latest book, Edwardian Opulence: British Art at the Dawn of the Twentieth Century (co-edited with Professor Andrea Wolk Rager of Case Western Reserve University, Cleveland, Ohio), was shortlisted for the 2013 Spears Book Awards in London. He is a regular contributor to The Times Literary Supplement, The Burlington Magazine, the Paris Review, Esopus Magazine, and the Australian Book Review.