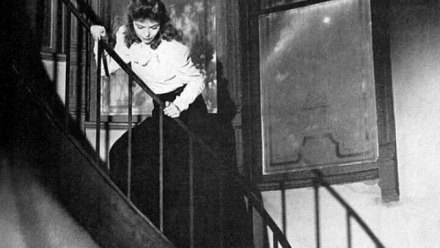 Writing in 1946, Frankfurt School critic Siegfried Kracauer expressed dismay in response to what he saw as a new vogue for ‘horror sheerly for the sake of entertainment’ in Hollywood—on display, he argued, in films like Robert Siodmak’s The Spiral Staircase (released the same year) and Alfred Hitchcock’s Suspicion (1941). This seminar looks at several films—retroactively classed as film noirs—implicated in the vogue for ‘terror’ and ‘horror’ that disturbed Kracauer in the post-war moment: The Spiral Staircase (1946), directed by Robert Siodmak, adapted from Ethel Lina White’s novel Some Must Watch (1933), Otto Preminger’s Laura (1944), based on Vera Caspary’s 1942 novel of the same name, and Max Ophuls’ Caught (1949), adapted from Libbie Block’s Wild Calendar (1945). Focusing on continuities and discontinuities between these films and the works of popular fiction on which they were based, this seminar reassesses the darkness of noir narratives in the context of shifting conceptions of liberalism, femininity, and forms of agency in mid-twentieth-century American culture.

Morgan Thomas researches ideas of the ‘poor’ image in modern and contemporary art, with a primary focus on visual culture in mid-century and postwar America. Her publications include contributions to Rothko (Tate), The Fall of the Studio: Artists at Work (Valiz, Amsterdam), How Aborigines Invented the Idea of Contemporary Art (Power Publications), Law and the Visual: Representations, Technologies, and Critique (University of Toronto Press) and contributions to the Journal of Curatorial Studies, A+A Online, New Literatures Review, Reading Room, caareviews, and Literature and Aesthetics. She was co-editor and co-translator of Jean-François Lyotard’s The Postmodern Explained (University of Minnesota Press). She has taught on a variety of topics in modern and contemporary art history, museum studies, post-colonial studies, and film and media studies at the University of Canterbury, the University of Queensland and, most recently, the University of Cincinnati.